This is how you should train yourselves:

“Those discourses taught by the Lord --- deep, profound, transcendental --- from time to time we will spend our day in learning them.”

That is how you should train yourselves.

If anyone abuses you to your face, strikes you with a fist, throws clods of eart at you, beats you with a stick or gives you a blow with a sword, you must put aside all worldly desires and considerations and train yourself like this:

“My heart will be unwavering. No evil words shall I speak. I will live with compassion for the good of others, with a hindly heart, without resentment.”

Thus, must you train yourself.

Once, while the Lord was staying near Kosambi Ghosita Park, Venerable Udayin, surrounded by a great gathering of laymen, sat teaching the Dhamma. Now, Ananda saw this, so he went to the Lord and told him, and the Lord said:

On one occasion, the monk Visakha of the Pancalas was teaching Dhamma in the assembly hall. As the evening approached, the Lord, rising from solitary meditation, went to the hall and sat down on a seat made ready for him and asked:

“Who was teaching Dhamma so well?”

Then the Lord said to Visakha:

Then the Lord said further:

If he does not speak up, others know him not;

He is just a wise man mixed up with fools.

But if he speaks about and teaches the Immortal,

Others will know him.

So let him light up the Dhamma,

Sages have illuminating speech as their banner.

Dhamma is the banner of sages.

Discussion on the Heart Sutra 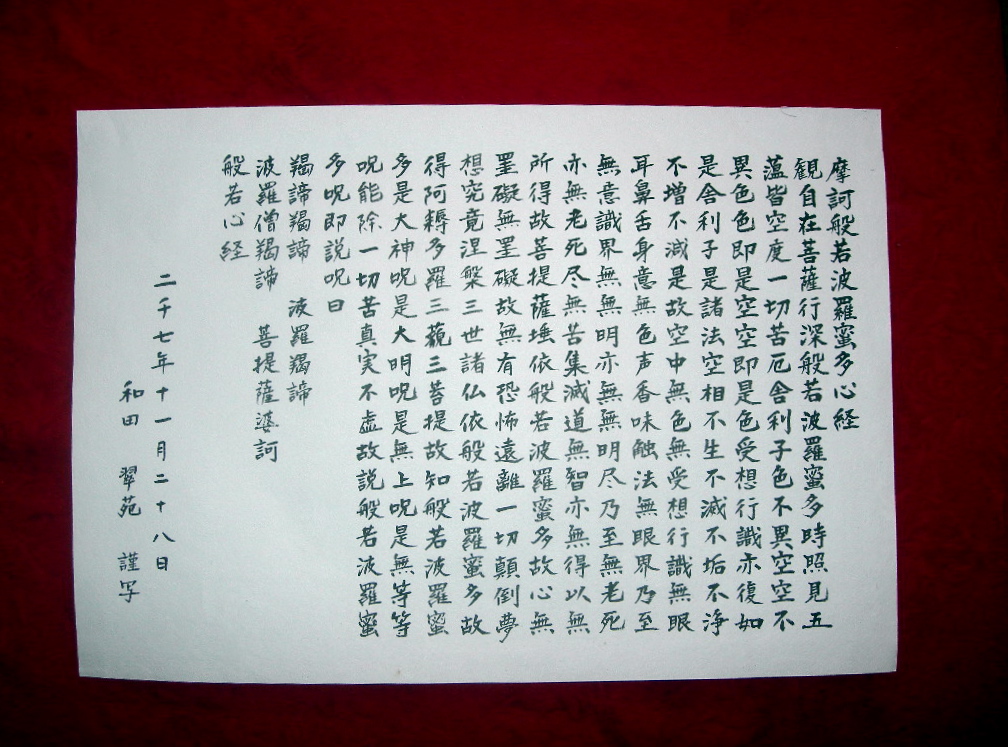 This week I would like to begin a discussion on the Heart Sutra, otherwise known as the Mahaprajnaparamitssutra.  There are many excellent English translations of the text of this very short but sweet Sutra in its entirety, so I won't retype it here.  However, this week, you can read over it and meditate upon it, and next week we shall begin a discussion on its contents, context, and meanings.

(Your Dharma is Way Too Small)

Basic Buddhist Philosophy and Doctrine most generally has as a foundation the notion of the Three Poisons, the Three Unwholesome Roots, and/or the Three Fires: Namely, these are Greed, Hatred, and Delusion. Corresponding to these are what is known as the Three Antidotes or Wholesome Roots: Non-Greed, Non-Hatred, and Non-Delusion. So far so good, as far as basic teachings go. However, one begins to divert rapidly away from these simple tenets when it comes to the 'fleshing out' of these fundamental concepts; generally most Buddhist traditions agree with the Principles of this fundamental teaching, but disagree, sometimes sharply, over the Facts or skill set necessary in order to apply these Principles unto practical reality upon a daily and individual, let alone collective, basis. The net result is an inevitable entrenchment...or what I call 'Tradition Jealousy', or the pitting of one form of Buddhism versus another, which is increasing in popularity...namely, the human tendency to self-justify and blame another for one's own shortcomings regarding these Teachings, and therefore accordingly self-justifying the denial of the place of repentance, daily examination, and transformation...transformation, I remind you, dear reader, as being at the heart of the Buddhist Path to begin with. By way of explanation, I shall first illustrate in basic terms a workable definition of the Three Poisons, then their Antidotes, and finally how a lack of humility (I believe a precursor to Ignorance which gives rise to the Three Poisons), is causing greater strife and derision among the many cultural, traditional, and schools of Buddhism today.

First, we have Greed, which can be simply defined as an ego driven, desired based and groping attachment for happiness, peace, and fulfillment, and the misplaced or unskillful means to achieve these otherwise lofty sounding goals. Such Greed is also known as Tanha (unquenchable thirst)...an almost seemingly endless lust and hunger for the attainment of an external goal which shall satisfy, once and for all, all our needs; the unskillful state of basing our happiness and fulfillment upon something other, external to ourselves, a 'most perfect Dharma' which suits us and our ego conception of 'Me'. Most generally this shows up in a lack of loving-kindness or compassion in action toward others (which is only an external manifestation of said lack of compassion unto ourselves). Many a war or conflict can be traced to this Greed in action, pitting nation against nation, lover against beloved, child or parent against family....sangha against sangha.

Second, we have Hatred. Notice that Hatred is a fruit of Greed; one begets the other, and other magnifies the one before it. Hatred has many manifestations or meanings, chief among them are anger, ill-will, divisiveness, and the wishing of harm or unpleasantness upon another, either as revenge or preemptive, prescriptive vengeance; the keeping of a score card...the settling of scores deemed to have been tallied in error. It is, simply put, a strife inherent within the human condition to fulfill biologically instilled drives for the avoidance of harm and the instillation of pleasure against that self-same drive in others; we want pleasure, but believe that the only way to obtain it is curbing this drive in someone else. This gives rise to inevitable duality and division...us vs. them, me vs. you. In not obtaining what we believe will satisfy these internal drives within ourselves we naturally feel fear, hurt and loneliness. Remember, too...that the other side of the anger coin is indeed such fear; anger being the inappropriate, knee jerk and reactive defense ploy we utilize to separate ourselves from that which we fear. In the name of avoidance of the negative and pursuing all things positive we necessarily deceive ourselves and deny these equally naturally and inherent drives, as well. It is a shame and embarrassment to us when such feelings are displayed by others, accordingly...hence the derision which Hatred (as begotten by Greed), engenders. Another manifestation of this tendency is in the clinging unto tradition, lineage, teacher, language...a tendency to cling to a self-created Buddha...a Buddha who is naturally bigger than yours, more resplendent, more golden; a prideful display in which I, with much melodrama, trip over your Buddha, blaming this as the reason for not being able to reach mine (even though, being mine, my Buddha is more extensive, more encompassing, more traditional, than yours). Conflict, strife, and evil doer creation is another offshoot of this tendency, as well. We falsely perceive it to be of the utmost pride, purity, and prowess to stamp these evil doers out, preemptively if necessary, lest their very existence keep me from reaching the Buddha of my creation. We see this now in the rise of Fundamentalist movements in places of societal change and multicultural expanse, i.e. radical Islam bombing fellow Islamic persons and places of worship, and the tendency throughout its longer history of Buddhism to easily justify murder based on Karma, political influence, and ethnocentrism; murder which has traditionally been deemed as not against the Precepts, but as its true fulfillment...a higher and sublime expression of the Bodhisattva path. The current and historical precedence of Thailand, Myanmar and the island nation of Ceylon come to mind, besides the rampant rivalries in the name of Buddha in China, Japan, and elsewhere.

Lastly, the third poison, is called simply by the label, Delusion. Delusion, put simply, is the failure to perceive things just as they really are. Notice that this is a fruit of Greed and Hatred, but also in turn causes these other two. Delusion is division incarnate, as it were. This is the pernicious failure, out of ignorance, to perceive our own true nature and the interconnected/interdependent nature of all things. Hence, fear and misunderstanding, in not getting that which we lust after (falsely thinking such things are needful for us), and the knee jerk reaction of anger in response to the artificial separateness and competition created, thereby. By extension, if we do not truly perceive and appreciate the true nature of things, we thereby also do not fully or truly perceive and appreciate the existence of suffering, its cause, the necessity of transforming suffering, and how to go about doing so. Wrong View concerning this fundamental tenet of Dharma is what likewise engenders a wrong sense of Buddha-nature, inter/intra Sangha relations and fellowship, and the decay of Dharma overtime....a decay predicted by the Buddha himself. It is this very decay which, in our day and age, is once again giving birth to religious fervor, fundamentalist tendencies, and yes, even violence and immolation...in the name of Buddha, Dharma, and Sangha.

Wrong Views along these lines as described, supra., take place internal to our spiritual, inner Mind...hence, this is where transformation must likewise also occur. The Japanese first name of Daishi comes to mind, here....when used in this context, it means “The Great Aspiration”. I have also seen it used to mean something akin to 'The Great Death' as in the death of the Ego upon ones cushion of meditation...a moment of satori. We need to be 'Daishi' in our approach towards ourselves, and towards ourselves need to thereby apply the transforming antidotes of the Three Poisons....the fruit of which then naturally flowing out, meritoriously, toward all beings. Anything short of this is unskillful, at best...and a tree is known by its fruit, likewise. If destruction is the result, how can this be accounted as creativity? Substitute any of the Three Poisons in that statement and you will see what is the challenge toward humility in approaching the Dharma, lest we become unskillful and miss the mark; If (Greed/Hatred/Delusion) is the result, how can this be accounted as (Dana, Loving Kindness, or Truth)?

By skillfully learning Dharma through humility we can develop the discipline necessary to overcome suffering and thereby attain liberation; within ourselves, and by extension, giving rise to this around us, under others. This is why derision is a kind of proof that Dharma is lacking or is at low ebb; if we realize, at this present moment, the pure intent and aspiration of bodhichitta, right here, right now, not in the past, not in a potential future which does not exist, but now...truly, then we manifest Buddha in the world and the Pure Land of Cultivation unto others. Such a Buddha is not jealous...is not begrudging in Dharma practice. Such a Buddha does not pit herself or himself against another, in the school yard of mindful practice, coyly taunting all others, “My Dharma is bigger than yours!”